Fenix has announced the WT50R, which has so many functions it’s hard to list them all.  First, here’s the light:

That’s no-joke of a light.  Big beefy, and with a handle.  Who doesn’t love a handle light…  The handle has multiple uses, and even includes a big metal e-switch for operating the WT50R.

Primarily, this can be seen as a search light.  The big Cree XHP70.2, an emitter not renown for it’s throw capability, still hits over 400 meters in this light.  That’s partially due to the deep reflector:

And also partly due to the light just churning out tons of lumens (rated for 3700 lumens!)

Another neat feature of this light is a secondary/side emitter, with lower output and a TIR optic more suited for close up work.  This will have a Cree XP-G3 emitter. 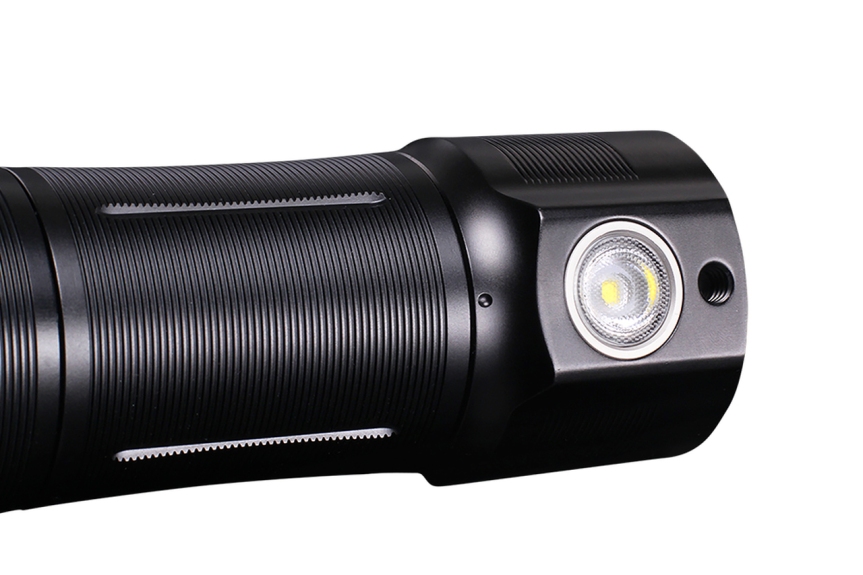 Also note on that image above, the tripod mount.  The secondary emitter faces outward from the handle, so the handle will be useful for using the side emitter and the main emitter.

The tail end of the light has tons of business.  First you’ll need to know that the battery for the WT50R is build in (boo) but has USB-C charging (yay!).  The battery is a 7.4V 5200mAh battery.  Some product photos do indicate that the battery is replaceable but of course it’s a proprietary Fenix battery.

Also included is a USB-out port!  Great for charging cell phones and the like.  It’s unclear as of now whether the USB-C port may be used for output as well, or if it’s only for charging the WT50R.

The tailcap also shows the battery level indicator, which is four blue LEDs.

The handle itself will have a shoulder strap attachment.

The light is available for pre-order now, and will retail for $249.95.  View more here

All photos courtesy of Fenix-store.com.